Dr. Anil Menon joined Cisco Systems as president of Globalisation and Intelligent Urbanisation in March 2009. In this role, Dr. Menon co-leads Cisco’s globalization efforts and East Headquarters in Bangalore, and Cisco’s global initiatives around Intelligent Urbanization (IU). IU is a key globalization priority for Cisco, and the company is focused on working with cities around the world to use the network as the platform for driving economic, social, and environmental sustainability.

Prior to joining Cisco, Dr. Menon held several positions as a senior executive at IBM Corporation, most recently as vice president of Corporate Strategy for IBM Growth Markets. He also served as vice president of Worldwide Marketing and Strategy for IBM Systems and Technology Group. For three years, Dr. Menon was CEO of IBM’s Strategy Team, a rotating group of senior leaders charged with setting and driving IBM’s strategic priorities.

Before joining IBM, Dr. Menon was an academic and business consultant and served as head of the Department of Marketing Goizueta Business School at Emory University. He has consulted for and conducted executive workshops with senior executives and governmental officials throughout the world.

In 1999, Dr. Menon was awarded the American Marketing Association’s prestigious Paul Root/MSI Award (formerly the Alpha Kappa Psi Award) for academic research which had the greatest impact in the practice of marketing. In 2007, the Academy of Marketing Science awarded him the Distinguished Marketing Practitioner Award for innovations in marketing practice.

Dr. Menon is a member of the Board of Directors for The Center for Customer Insights at the School of Management at Yale University and a trustee of the Marketing Science Institute in Cambridge, MA. 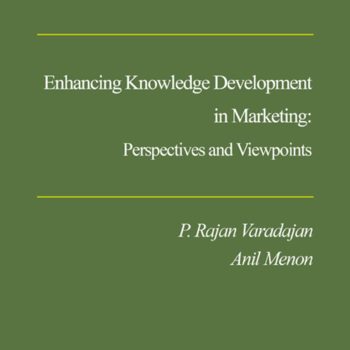 Enhancing Knowledge Development in Marketing: Perspectives and Viewpoints was edited by P. Rajan Varadarajan and Anil Menon. This monograph brings together the thoughts and concerns of some of the leading marketing academics and practitioners on the issue of knowledge development and knowledge use within the marketing discipline. Also included are selected papers presented at special sessions on enhancing knowledge development in marketing at the 1989 AMA Summer Marketing Educators Conference.