Professor Charles W. Lamb has written more than a dozen books and anthologies on marketing topics as well as over 150 articles that have appeared in academic journals and conference proceedings. In 1997, he was awarded the prestigious Chancellors Award for Distinguished Research and Creative Activity at TCU. This is the highest honor that the university can bestow on its faculty. Other key honors he has received include the M.J. Neeley School of Business Research Award, selection as a Distinguished Fellow of the Academy of Marketing Science, and a Fellow of the Southwestern Marketing Association.

Professor Lamb received his B.S. in General Business and Economics from Northwestern State College in Oklahoma, his M.B.A. from Oklahoma State University, and his Ph.D. in Marketing from Louisiana State University. 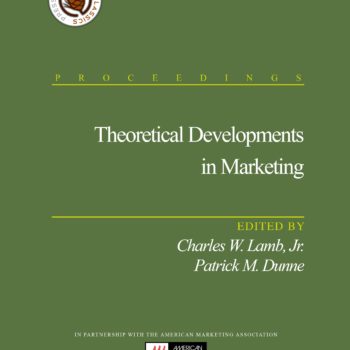 Theoretical Development in Marketing, edited by Charles W. Lamb, Jr. and Patrick M. Dunne, is a part of proceeding series published by the American Marketing Association. This work is a collection of 65 papers which were presented at the Special Educators Conference held in Phoenix during February 1980. Spread across 23 chapters that begins with a retrospective of Wroe Alderson – the father of marketing theory, these papers examine the niche areas of marketing such as pricing, distribution, channels, customer satisfaction, promotion, and sales management, as well as the marketing system in total, besides a special focus on the interrelationships of various marketing components.