Donald G. Morrison is Professor Emeritus, William E. Leonhard Chair of Management at the University of California in Los Angeles. Dr. Morrison is the author or co-author of more than 90 articles in referred journals with special emphasis on marketing research and applied statistics and has been an expert witness as a statistician in a number of legal cases and a consultant to industrial firms and governmental agencies.

A 1961 graduate of M.I.T. with a B.S. in mechanical engineering, Morrison earned a Ph.D. in operations research at Stanford University in 1965. He joined the Columbia Business School faculty the following year as assistant professor, served as associate professor from 1968 and was named professor of business in 1973. He has also served as visiting professor at Stanford and at the University of California, Berkeley. He joined the UCLA faculty in 1987.

Over the past 40 years, Dr. Morrison has supervised the doctoral dissertations of a number of students who are now faculty members of other leading institutions. Many are now on key editorial boards and eight have endowed chairs.

Dr. Morrison was the founding editor of the professional journal, Marketing Science and was editor-in-chief of Management Science for eight years. He has served as departmental editor or editorial board member of several other professional journals.

In 2002, Professor Morrison was awarded the highest honor in the American Marketing Association, when he was named the McGraw-Hill/ Irwin Distinguished Educator of the Year. 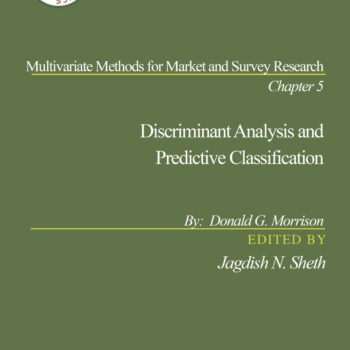 Chapter 5 of Multivariate Methods for Market and Survey Research