Frederick D. Sturdivant is a director of Dennen Steel, an independent consulting firm. He has served as a Visiting Professor at the Warrington College of Business at the University of Florida since 2004.

From 2000 to 2002, Dr. Sturdivant was Chairman of Reinventures LLC. From 1998 to 2000, he was Executive Managing Director of Navigant Consulting. From 1996 to 1998, he was President of Index Research and Advisory Services, a subsidiary of Computer Sciences Corporation.

Previously, he served as a director of Fel-Pro, Inc., State Savings Bank, Columbus, and The Progressive Corporation. After completing his Ph.D. at Northwestern University, Dr. Sturdivant held professorships at the University of Southern California, the University of Texas at Austin, the Harvard Business School, and an endowed chair at Ohio State University. 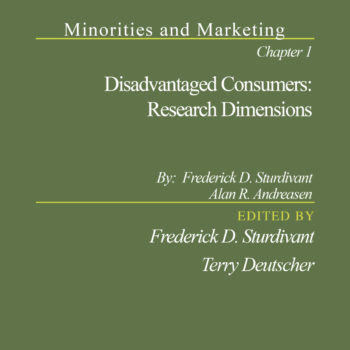 The authors’ objective is to establish specific fundamental propositions, regarding consumer behavior, to serve as the foundation for a systematic analysis of disadvantaged consumers. The chapter provides a framework to be used by future researchers in making systematic contributions to knowledge of low-income consumers. The chapter advocates the use of theoretical constructs and the specific propositions analyzed in the text for improved research on the disadvantaged consumer. 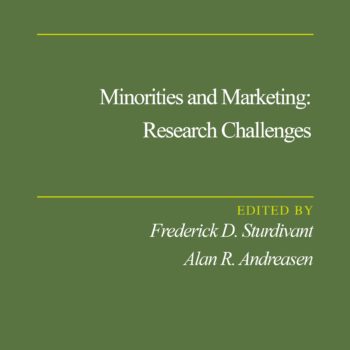 Minorities and Marketing is a collection of articles designed to further investigations and knowledge of minority marketing research. The primary focus is on the major unresolved issues and problems in the field. In its goal to present relevant methodologies and theories to deal with these issues, the text offers the following discussions:

With Minorities and Marketing, an invaluable contribution has been made to the study of consumer behavior and marketing research, particularly in regards to disadvantaged communities and buyers. This insightful and highly relevant text will prove to be a useful research tool for faculty and students of marketing research, consumer behavior, public policy, and economics.