Gerald Zaltman is the Joseph C. Wilson Professor of Business Administration Emeritus at the Harvard Business School and a former member of the Executive Committee of Harvard University’s Mind, Brain, and Behavior Interfaculty Initiative. He was previously Co-Director of The Mind of the Market Laboratory at HBS. He is a co-founder and senior partner in the research based consulting firm of Olson Zaltman Associates whose clients include some of the world’s most respected firms and brands. Professor Zaltman holds a Ph.D. in sociology from The Johns Hopkins University, an M.B.A from the University of Chicago, and an A.B. in government from Bates College. Professor Zaltman held positions at Northwestern University and the University of Pittsburgh before joining Harvard University in 1991.

His research interests focus on customer behavior and marketing strategy. His book, How Customers Think: Essential Insights into the Mind of the Market (2003) has been translated into 15 languages. It has received several awards and has ranked among the top five selling business books in North America and Europe. His newest book, co-authored with Lindsay Zaltman, is Marketing Metaphoria: What Deep Metaphors Reveal about the Minds of Consumers (2008). This book addresses the deep metaphors or unconscious frames people use that influence their thinking and behavior.

Professor Zaltman’s work has been featured in The New York Times, Fortune Magazine, Forbes, US News & World Report, Time, Fast Company Magazine, American Demographics, and other major publications. Professor Zaltman is a consultant to corporations around the globe and frequent keynote speaker at major conferences. He holds three patents for market research tools including the patent on the use of neuroimaging in marketing. Another patent, ZMET, is used around the world by major firms and international agencies. It has been described by several writers as the most significant innovation in market research in more than two decades.

His awards include the American Marketing Association’s Richard D. Irwin Distinguished Marketing Educator Award in 1989, the Association for Consumer Research Distinguished Fellow Award in 1990, the Knowledge Utilization Society’s Thomas J. Kiresuk Award for Excellence in Scientific Research in 1992, the JAI Press Distinguished Scholar Award from the Society for Marketing Advances in 2000, the ARF Member Recognition Award in 2007, and in 2008 he will receive the Massachusetts Institute of Technology’s Buck Weaver Award sponsored by General Motors for outstanding work in bringing knowledge and practice together. 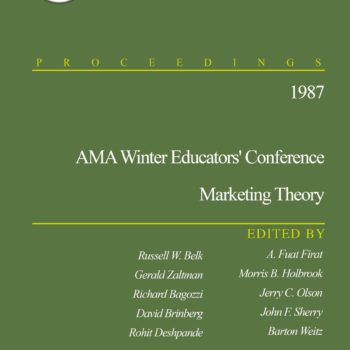 1987 AMA Winter Educators’ Conference: Marketing Theory is a collection of proceeding papers. These papers are jointly edited by Russell W. Belk, Gerald Zaltman, Richard Bagozzi, David Brinberg, Rohit Deshpande, A. Fuat Firat, Morris B. Holbrook, Jerry C. Olson, John F. Sherry and Barton Weitz. The papers focus on several conceptual tracks pertaining to marketing theory such as alternative ways of knowing, and sociology of the profession. These papers present new directions of inquiry in these areas as well as in other areas of marketing theory. 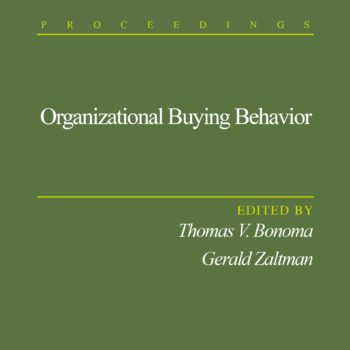