In 1990, he received the first Chancellor Award for Outstanding Teaching given at the University. Previously, he had twice received the UK Alumni Association Great Teacher Award, an award one can only be eligible to receive every 10 years. He has also received two Outstanding Teacher awards from Beta Gamma Sigma, national business honorary.

In 1992, he received an Acorn Award recognizing “those who shape the future” from the Kentucky Advocates for Higher Education. In 2001 and 2002, he was selected as “Best University of Kentucky Professor.” In 1995, he became one of six charter members elected to the American Bankers Association Bank Marketing Hall of Fame. He has also received a “Distinguished Doctoral Graduate Award” from the University of Maryland.

Professor Donnelly is very active in the banking industry where he has served on the board of directors of the Institute of Certified Bankers and the ABA Marketing Network. He has also served as Academic Dean of the ABA School of Bank Marketing and Management. 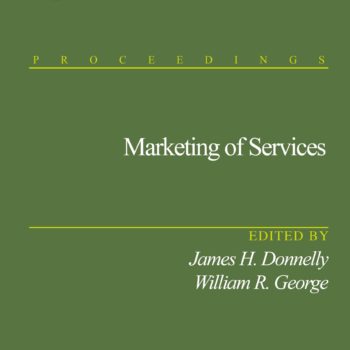 Marketing of Services was edited by James H. Donnelly and William R. George. This work is a collection of papers presented at the 1981 Special Educators’ conference, the first conference to be dedicated solely to services marketing. The papers are consolidated based on four tracks – Professional Services, Services Theory, Non-profit/Public Sector Services, and Commercial Services. The papers intend to stimulate interest, to provide knowledge in services marketing, and to act as a platform to bring academics and practitioners closer in order to address the key issues in services marketing.