Professor Johny K. Johansson is the McCrane/Shake Professor of International Business at the McDonough School of Business at Georgetown University. Professor Johansson has consulted with companies around the world, including Standard Oil of Indiana, General Electric and General Telephone and Electronics in the U.S., Ford Werke AG in West Germany, and Mazda and Fuji Film in Japan. In addition to publishing over 70 academic articles and chapters in books, he has conducted seminars at academic institutions, including Stanford, M.I.T., and Columbia University in the U.S., INSEAD in France, Vienna’s Neue Wirtschaftsuniversitat, and Hitotsubashi, Kobe and Nagoya Universities in Japan. 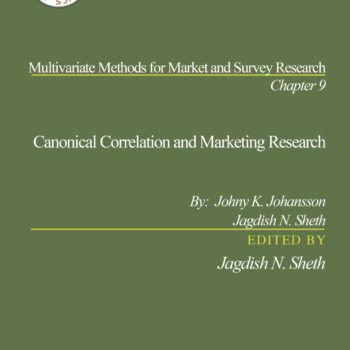 Chapter 9 of Multivariate Methods for Market and Survey Research

The chapter evaluates the appropriateness of the canonical correlation approach as compared to other approaches when deciphering a certain problem. Also presented is the use of canonical analysis when comparing multiple perspectives in a research study. The text attempts to determine the reason behind the limited literature on canonical correlation analysis and fill that gap.