Dr. Joseph O. Eastlack was a former researcher for the Campbell Soup Company when he left to start the masters degree program in international marketing at St. Joseph University. He died of cancer in July 2010.

When Dr. Eastlack joined at the Campbell Marketing Research Department in 1974, he was assigned to collect data in Eastern Europe and China on what people there were eating, how they purchased their food, and how they ate it. He returned to the Campbell headquarters in Camden and worked with other employees on which products would work best in certain cultures.

Dr. Eastlack retired from Campbell in 1988 and took a position teaching at St. Joseph University. During his 10 years there, he created and developed a masters degree program in international marketing. 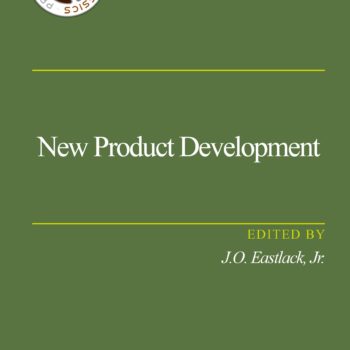 New Product Development, edited by J.O. Eastlack, Jr. and Jack Tinker & Partners, is a collection of papers that explores the processes of new product development prevalent in the late 1960s. Spread in five sections, this monograph explores the elements of new product success including identifying the opportunities, analyzing the consumer preference, showing the importance of product quality, and displaying the psychological factors for accounting the new product preference.