Leo Bogart was a sociologist, author and marketing specialist, known for studying the role of the mass media in culture. Dr. Bogart, who also studied advertising and public opinion had written nearly a dozen books. He served for many years as the executive vice president and general manager of the Newspaper Advertising Bureau. He taught marketing at New York University, Columbia University and the Illinois Institute of Technology. He was a senior fellow at the Center for Media Studies at Columbia and a Fulbright research fellow in France. He was writing a column for Presstime, the magazine of the Newspaper Association of America. He passed away in 2005 when he was 84. 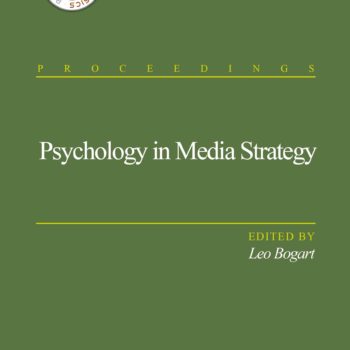 Psychology in Media Strategy was edited by Leo Bogart. This work is a collection of papers presented at a 1965 symposium sponsored by the American Marketing Association’s media research committee. These papers and discussion transcripts explain the contribution of experimental psychology in the field of marketing and advertising, as well as open up vast research opportunities in this topic. This volume also contains Dr. Herbert Krugman’s 1965 presidential address before the American Association for Public Opinion Research.