Richard Johnson had a remarkable career in an era that integrated the use of computers and mathematical models into marketing research. Joel Huber wrote an article in the Journal of Marketing in 2005 entitled, “What Has Marketing Learned from Richard Johnson?” This article summarizes his contributions in terms of theoretical advances, practical solutions, and the development of a culture that links the academic and practitioner worlds. The author speculates on the personality traits that made Johnson so successful and ways that his critical roles can be fulfilled by others in the future.

Thanks to the efforts of Richard Johnson, the way marketing research is thought about and done has changed. His work has altered the profession and aspects of his character led to his productivity and the prospects for others to continue this work in the future. Johnson made contributions in basic theory and applied knowledge, but most important, he was a critical catalyst in bringing so many ideas into general use in the market research community. Johnson was one of a group of psychometric pioneers who used the power of matrix mathematics and computers to help resolve fundamental issues of measurement. 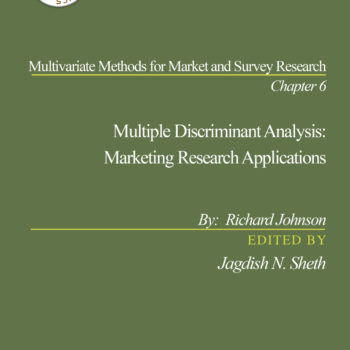 Chapter 6 of Multivariate Methods for Market and Survey Research