William Lazer is an eminent marketing scholar, who was a faculty member in many business schools such as University of Manitoba, Michigan State University, and Florida Atlantic University.

Dr. Lazer has published ten books, and he has written over 140 articles and monographs for professional journals and business periodicals. His works have been published in countries around the globe. He is completing a book on The Changing Face of the American Market.

Dr. Lazer was a member of the Presidential Blue Ribbon Committee on Trade Negotiations under two U.S. Presidents and has served as Chairman of the Census Advisory Committee (Marketing). He was conferred the degree of Doctor of Laws, honoris causa by the Senate of The University of Manitoba. 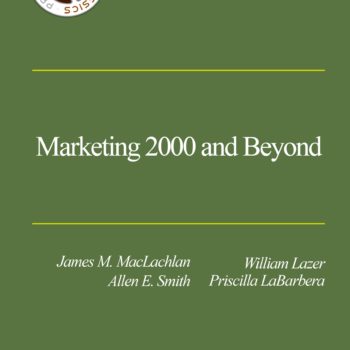 Marketing 2000 and Beyond was written by Dr. William Lazer, Dr. Priscilla La Barbera, Dr. James M. MacLachlan, and Dr. Allen E. Smith in 1990. This work provides an outlook on the changing marketing environment in the twenty-first century. It incorporates insights from CEOs, academics, and futurists on possible trends, as well as changes and challenges in marketing and their management implications. Also featured is an extensive review of the relevant futures literature and ideas on the future organization and deployment of marketing resources.